For anyone that knows me they know I have an obsession with eggs. I’ve never been one for a sweet breakfast. Eggs, toast, avocado, and the occasional bacon (or chicken sausage) have always been my go-to. But after doing some research and letting my tastebuds change over the years I’ve decided to switch things up.

Oats were not my really my cup of tea growing up. My mom would always ask me if I wanted a bowl of oatmeal and the thought of it actually grossed me out. Not sure if it was a texture thing, but they just weren’t for me. It wasn’t until this year that I found a new love for oatmeal and sweet breakfast choices in general (yogurt, pancakes).

This doesn’t mean that oatmeal can’t be savory. I’ve seen plenty of recipes with savory oats, the recipe I made just happened to be sweet. 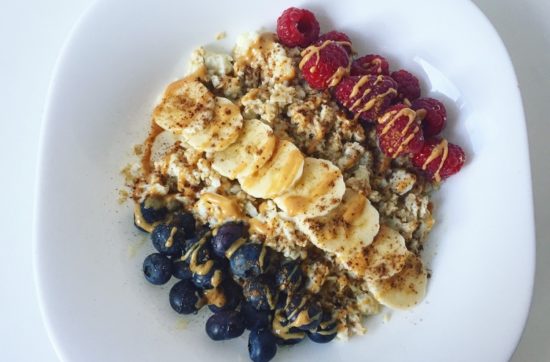 First boil some water on the stove. Try not to use the microwave unless you’re in a hurry. Everything is better when made on the stove top. Add your 1/2 cup of oats into a bowl while the water boils. In a separate small bowl melt together your almond butter and coconut oil. In pan cook up your egg-whites. Pour the boiling water over the oats. Mix together until it becomes almost paste like. Add in the egg-whites. Put the fruit on-top, drizzle some honey and your coconut oil/almond butter mix. Dash of cinnamon and you’re good to go!

Seriously these were amazing and I never realized how filling oats were especially when you add some egg-whites to them.

It’s crazy how different pregnancies can be. Wit

Merry Christmas & happy holidays. We hope that you

4 ingredients protein buckeyes: For the balls: